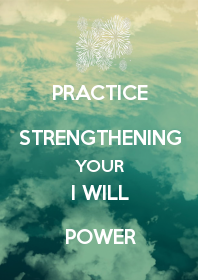 Willpower is an instinct everyone has, yet it consists of much more than simply saying “I will’, or “I won’t”. As we move into the third week of the New Year, some of the lofty goals and self-control have vaporized. Don’t despair though;   self-control is only one part of willpower. The ability to remember what you REALLY want, (get out of debt, fit into your clothes, more sleep) is the ability to say “yes” to that particular goal. This is what Kelly McGonigal, Ph.D., psychology  lecturer  at Stanford University, whose course, The Science of Willpower, teaches and  which her new book is based on. “To exert self-control, you need to find your motivation when it matters. This is the “I want” power, she writes.

A student in Dr. McGonigal’s class, a producer, was an e-mail addict. Her behavior disrupted not only her work, but annoyed her boyfriend. The student described her email impulses almost as an itch-she just had to check her email. She was always tense. Her assignment was to catch herself before she reached for her phone. With time, she realized that her impulses had nothing to do with seeking information and was doing nothing to relieve her tension. As she began to notice how she gave in to her impulses, it gave her new control over her behavior. Catch yourself  falling  for your impulses earlier  in the process, and  notice which thoughts or situations might make it more likely that you will give in to your impulses, are strategies that McGonigal  teaches.

Stressed and Sleepless: The Enemies of Willpower

Willpower is essentially a mental muscle, but the body also needs to get onboard. The best intentions in the world can be sabotaged if you are sleep-depraved, stressed, sedentary, have a poor diet, or a host of other factors that sap your energy. Stress is the worst enemy of willpower, McGonigal writes. The  American Psychological Association shows  that 75% of Americans have high levels of stress and 76% of Americans want to improve the quality and quantity of the sleep they get. New evidence shows that poor sleep and stress contribute to poor self-control and focus. How can you harness positive willpower if you are exhausted? Inadequate sleep also contributes to weight gain, high blood pressure, depression, and lowered immunity. Globally, sleep deprivation affects the quality of life of 45% of the world’s population, according to the World Association of Sleep Medicine.

( from The Willpower Instinct. How Self-Control Works, Why It Matters, and What You Can Do to Get More of it -by Kelly McGonigal, Ph.D.)

Above all, believe in yourself and keep your dreams alive in 2012!